Volunteers crucial in management of frogs, lizards and birds at Sydney Olympic Park

Wading through the wetlands to rapidly count birds as they emerge is one of the most unique ways volunteers contribute valuable data to support the management of biodiversity at Sydney Olympic Park.

During National Volunteer Week, Sydney Olympic Park Authority is shining a light on the dedication of volunteers who have been fundamental in the successful conservation and management of wildlife since 1995.

“The sheer scale of Sydney Olympic Park with 430 hectares of parklands means monitoring is an absolutely huge task. A significant amount of data needs to be regularly captured so we know what the health of the habitat is and how to best support wildlife.”

“We just couldn’t do the monitoring effectively if it wasn’t for volunteers; it is just that simple, they are invaluable.”

Volunteers are able to spend their time accessing restricted areas, guided by Sydney Olympic Park Authority, for memorable experiences like spotting the endangered Green and Golden Bell Frog inside the old Brickpit, or entering wetlands to sight incredible birds such as the Latham Snipe.

Tony Dymond is part of the Cumberland Bird Observers Club and is one of the longest serving volunteers monitoring bird life at Sydney Olympic Park for 17 years.

“People are gobsmacked by the wildlife at Sydney Olympic Park. There are very few, if any, big cities in the world where you have this sort of habitat within 30minutes of the CBD,” said Dymond.

“One of the key benefits of volunteering at Sydney Olympic Park is the knowledge that data is then being used to maintain the quality of all the wetlands, woodlands, grasslands and parklands. Volunteers feel they are making a major contribution to preserve the area.”

Other benefits resulting from volunteering include meeting interesting people and forming friendships, the excitement of discovering rare sightings and overall improving or gaining new skills.

“We work hard to recruit new volunteers, and people soon get the bug when they come out to the Park,” Mr Dymond said.

One of the fresher faces to volunteering at Sydney Olympic Park is 18-year-old Ben Garside, who has had an affinity with animals for as long as he can remember, and ventured into the Brickpit in search of reptiles.

“I thought it was a really good experience to do wildlife counts and find some of the more rare species that you wouldn’t typically find in other areas,” Mr Garside said. 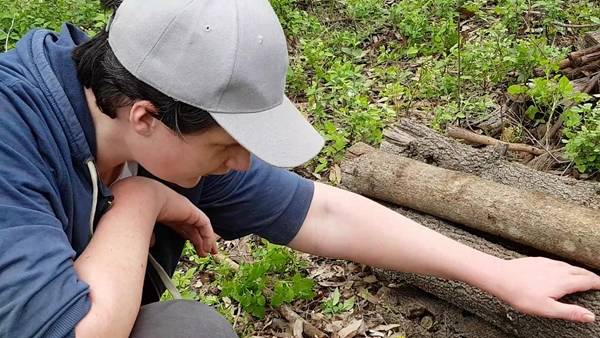 “It was the first time I saw the Green and Golden Bell Frog that was spotted in a little pond.”

Mr Garside said he would definitely do it again and would encourage others to give it a try.

“Get in and do it, it is a lot of fun,” said Mr Garside. “If you are interested in animals there is no better place to do it; this is an easily accessible area where you can see species in the wild.”

To become a volunteer, email enquiries@sopa.nsw.gov.au